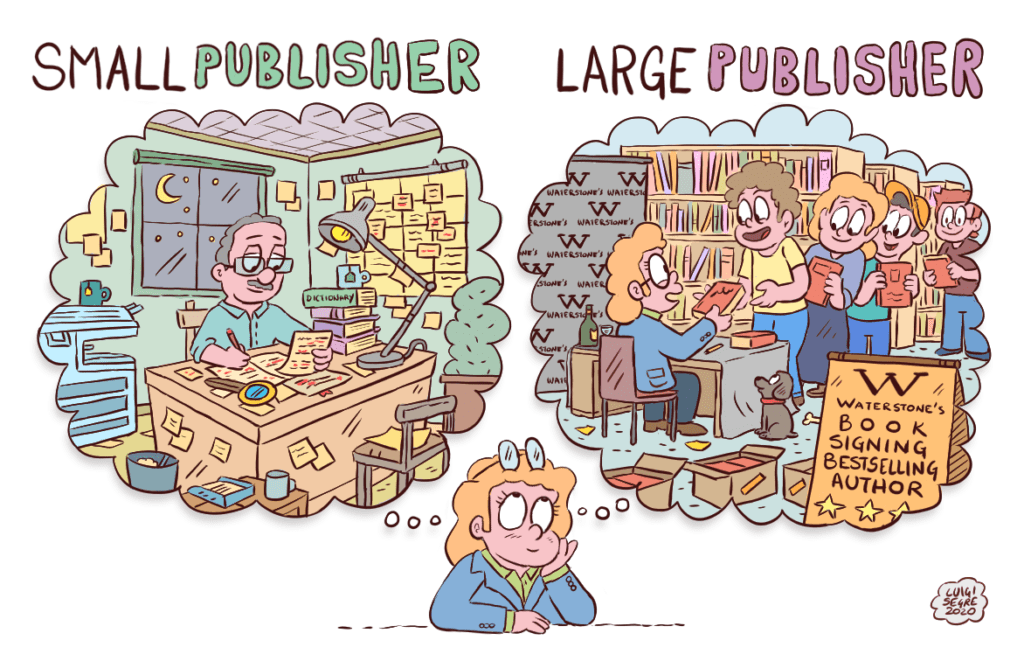 Does size matter when it comes to choosing a publisher?
Most authors have heard about the pros and cons of big publishers versus smaller ones – larger publishers generally have more money to spend while smaller publishers are thought to take more care of the books on their lists, especially with regards to editing.

Is this really the case?
Over the years I’ve worked for a conglomerate (the Penguin Group), medium independents (Harrap and Faber), and a few small publishers, including my own. In my experience, this polarisation does not hold up. Yes, large publishers have more money to splash around but that’s no guarantee your book will receive a greater promotional spend. Similarly, working with a smaller publisher does not necessarily mean authors receive more attention or higher standards of editing.

Let’s start with editing…
A small publisher once commissioned me to market a book called Modern Life is Rubbish! My brief was to select enticing snippets from the book to spice up the press release. An uphill task.

I assumed that I had been given an unedited draft by mistake. When I later joked to the publisher about ‘life being too short to read beyond the first paragraph’, there was a stony silence before he replied: ‘I spent all weekend editing it’. Shortly afterwards, perhaps understandably, my marketing services were no longer required.

Clearly, the publisher and I had a very different understanding of the meaning of the word ‘editing’.

In my early days in publishing as an editorial assistant at the Penguin Group, I received a robust grounding in the successive editorial stages ­– structural/developmental editing, line-editing and copy-editing – deemed by Penguin as essential for producing a good book.

For the publisher of Modern Life is Rubbish!, however, editing appears to have meant typesetting and proofreading – processes at the final stages of book production. No wonder I thought I had been given the original manuscript!

Another issue with regards to editing is expense. Freelance editors can charge more than £40 an hour, which many small publishers can’t afford, especially when the hours start to mount up – a decent editing job takes time.

The moral is, don’t take professional editing as a given. Instead, ask about the editorial process. In my view, a book needs at least two editorial stages (excluding proof-reading). First, the stringent process of structural- and line-editing, and only after this, the final copy-edit.

Does working with a large publisher guarantee a big promotional spend?
Well, no.

While it’s true that bigger publishing houses work on a much larger scale than smaller ones, the really big marketing spends – such as in-store promotions – are limited to a few books.

It’s a sad fact that book sales are as much a function of visibility as of merit. The cost of creating a bestseller through the sort of front-of-store displays you see in WH Smith, for example, are eye-wateringly expensive. Ditto Amazon’s online equivalent – I once had to sign a confidentiality agreement just to be shown their Christmas promotion prices!

A book’s sales expectations are set at the publisher’s commissioning meeting, when the costing is circulated among the sales and publicity departments.  Authors do not attend these meetings. Whereas publicists tend to be more upbeat, sales look at the worst-case – or realistic – scenario, depending on your point of view. Ultimately, the promotional spend for your book will be proportionate to its sales estimates.

This may sound harsh but it’s simple economic reality. The main problem is the lack of transparency and the fact that some editors try to shield their authors from dispiriting sales projections.

The moral of this tale is to make sure you know the score from the start. Otherwise, you’ll be imagining jolly lunches at The Ivy only to discover you’re in Costa Coffee territory.

What’s the story with self-publishing?
As self-publishers don’t have traditional routes to market, they’ve had to work extra hard to develop their own paths. And many of them are doing it rather well, thanks to an increasing number of online forums, blogs and organisations offering how-to knowledge on everything from DIY video making to the best software for formatting ebooks. The result is a burgeoning market, with promotions on a shoestring showing a particular wealth of creativity.

In another post I’ll be discussing the questions I wish I’d asked as a first-time author.